Dowry Problems in India - Causes and Effects with Solution 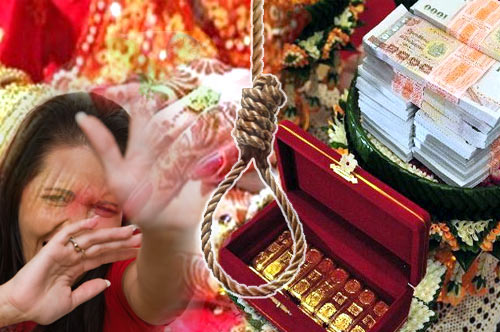 A Brief
"Denigration of women has devastated our society".
Our first Prime Minister, Jawaharlal Nehru said, “One can predict the condition of a nation by looking at the status of its women. Indian culture is the first and the supreme culture in the world but is losing its existence on its own due to various social problems. Dowry, the social evil is deep rooted in Indian society. In modern Indian political discourse the custom of dowry is often portrayed as the cause of serious social problems, including the neglect of daughters during childhood, early marriage, atrocities on women, sex-selective abortion, female feticide, and the harassment, abuse etc. The dowry system is so deeply rooted in Indian culture that perhaps it seems that there's going to be no way out - at least not for another century. They say that the citizens of the country have turned into a modern population but still Dahej Pratha is flourishing promptly. Social Issues are customary in every one or other village in the current date. Even cities are not more far from the villages. Every now and then, there comes a news of harassment of a women for dowry. Patriarchal societies are growing violent as time passes.
Dowry (dahej) is one of the most ancient practices of India.

Current scenario in India
The main root actual meaning of the dowry is totally misunderstood now a days and hence, it has become the hectic problem for India. Earlier, as suggested in the vedas, the actual meaning of the dowry was that, the bride's family used to offer some gifts as a token of gratitude to the bridegroom's family. It was just a token of gratitude, nothing else! The gifts took the shape varying from a herd of goats to kilos of gold. But, as for now, this has unusually grown into a demand from the bridegroom's family, It is no more the same token of gratitude from the bride's family as it was used to be. The Vedas prescribe that a dowry be given by the bride's family to the groom. The Rig Veda proclaims that cows and gifts given by the Aryan father of the bride to the daughter accompanied the bride's procession. ‘Kakshivat’ in the Vedas states that he became prosperous by the father-in-law giving him 10 chariots and maids and 1060 cows during the marriage ceremony. Dowry is referred to as `Streedhana’.

Why this problem is arising
This custom implied that women were, in addition to being viewed as mere sex objects, severe economic liabilities for the parents. Indeed, the Brahmins raised the level of dowry to such hilarious levels that the non-Brahmins were forced to murder their female children or face economic ruin. In this manner, the non-Brahmins exterminated their own females, sustaining Brahmin dominance. We see this philosophy in action today. As per the book “Genocide of Women in Hinduism”authored by Sita Agarwal, over the last 65 years, more than 50 million female children have been  murdered as a result of Vedic dowry and infanticide laws.

The practice of dowry and terms like “dowry death” and “dowry violence” are confidentially related to the patriarchal values and the views of women status in the Indian society. They contribute towards making domestic violence in India appear as a unique, striking phenomenon by giving the impression that Indian men are the only ones in the world to use violence based on shrewd and rational calculations. By this logic, it would appear that men in all other parts of the world are truly stupid because they beat and kill their wives without any benefit emanating to them, whereas Indian men attack their spouses in the expectation of extracting financial rewards from their in-laws.


Best Solution to look forward
Injustice begins at home. So we need to stop such practices in our locality. Each and every citizen should take the pledge to protect and respect women. Women up-liftment should start at the root level. Only all the women should be unitedly fight against this evil system. Women commission and all the different women forums should find out such causes of dowry system and punish those greedy guardians who encourage this system. The most effective remedy is to bring consciousness against this evil system through education and social awareness. There is also the necessity of spreading of women’s education to fight against the dowry system. Social stigmas and taboos need to be dealt with. Proper social and financial support system needs to be created. Dowry and the coping strategies adopted for its provision have the potential to drive people down to a state of extreme poverty. However, recently a number of NGOs working in Khutamara union have been directly targeting extreme poor households with the intention of graduating them out of poverty. Additional research at the community level uncovered that these two components, dowry and livelihood assistance, in alliance enter households into a sort-of cycle whereby they fall into and graduate out of extreme poverty. The aim of this action research is therefore to identify viable and practical interventions that can support a change in people’s preferences and actions in relation to dowry, grounded in the prospective of the community and thus closing the gap between the perceptions of dowry and projects that aim to mitigate the practice.