Infrastructure Problems in India and Solutions 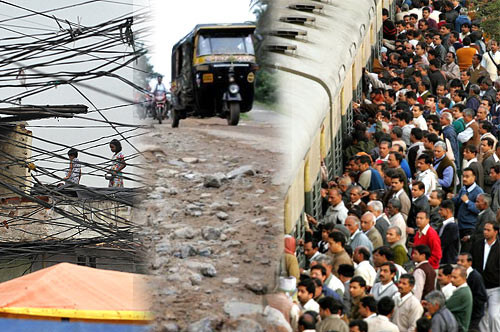 A brief about the topic
Infrastructure means activities such as electricity, transport, telecommunications, provision of water, and sanitation and safe disposal of waste. India is the fourth largest economy in the world. However, one factor which is a drag on its development is the lack of world class infrastructure. This even affect country’s economy growth and economic development and pulls down the country’s gross domestic product by 1-2 percent year on year. To start with, electricity is the main issue to be addressed as there is more demand and less supply leading to increase in electricity prices per unit. Transport is another issue to be addressed. Though it should be the strongest and most prominent and promising part of India’s infrastructure but it is not and the worst part is it does not have good connectivity from place to another. Neither its quality nor its quantity is up to mark as required. In fact even the aviation transport needs modernization at par with new technology. May it be private sector or public sector resources are required and the problem is that they are not available.

Current scenario in India
Current scenario decides about where we stand and how much we need to improve to reach the world class level. And the data says that we need to improve a lot. We do not have access to sanitation facilities. Today’s infrastructure will not meet tomorrow’s needs. For example with increasing traffic scenario we will need more, high quality roads in order to maintain free-flowing traffic. If we look from another angle then we realize that roads Sector exhibits a mix of public sector and private sector users. Even as far as actual roads are concerned there has been some entry of private operators in the field. As far as the public sector is concerned there is a reasonable amount of quality data available. This is especially true of public sector passenger transport. Still the road infrastructure lacks Quality of roads at various levels such as National Highways, State Highways, and Rural Roads. The power sector in India still has problems such as Major data gaps on captive power generation, Lack of a proper mechanism to get information on the closed units immediately after they cease to operate and Problems in data collection from decentralised locations due to division of State Electricity Boards.

Why this problem is arising
The problem arises because inadequate infrastructure regulatory framework and inefficiency in the approval process. It takes you several years to start a project as it does not get approved on time as there are conflicting interests. The process delays the clearances and its implementation.


Best Solution
Solutions are always there for any sought of problems but there should be an urge to implement them successfully. The Railway Board should make the Annual Statistical Statement, which at present gives zone-wise data in the form of an unpublished and internal document, widely available. The data-collection system for the private sector should be strengthened and identified data gaps be addressed. The Director General, Civil Aviation should publish the data on airways for both the nationalised and private airlines. The prevalent statistical system for the sector should be modernised through application of advanced Information Technology. A mechanism should be evolved by the Ministry of Shipping to collect data from individual shipping companies, which own one or two vessels in most of the cases. India Infrastructure Finance Corporation. They help fund infrastructure projects. The Government has initiated the Jawaharlal Nehru National Urban Renewal Mission (JNNURM) to improve urban infrastructure and the Bharat Nirman program has been instituted to improve infrastructure in rural areas.