Labour Problems in India and their Solutions 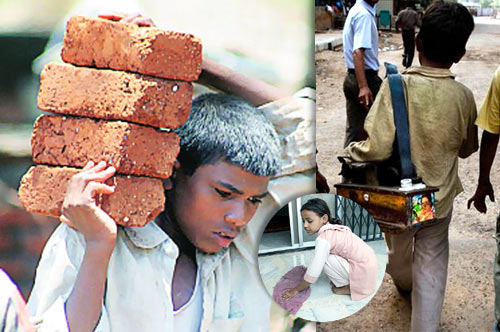 A Brief
An Unorganized Sector can be defined as the sector where the elements of the Organized Sector is not present. During this period of absence of a higher analytical definition, the landscape of the unorganized sector becomes synonymous with the kaleidoscope of unregulated, poorly skilled and minimally paid workers. To define an unorganized sector we can say that it is a part of the workforce which has not been able to organize in pursuit of a common objective because of constraints such as casual nature of ignorance, illiteracy and employment, minimum size of establishments with per person employed, low capital investment, superior strength and scattered nature of establishments of the employer etc. It is important to note that in the town of Birbhum, the phenomena of rising overall work participation has been associated with an increasing share of marginal workers in total work force. Visva-Bharati, with the help of Rural Extension Centre can runs special courses to empower such a big work force. The informal sector is not a separate and closed circuit of work and labour. There are different terminologies used to signify the unorganized sector like informal sector, economy and even same informal labour too, which often highlights the most affected part of the sector, namely, the labour. “Informal labour is a labour whose use is not governed either by state regulations or by collective agreements between workers and employers.”

Current scenario in India
India's workforce comprises nearly 93 per cent in the unorganized segment, along with the whole farm sector coming under the informal category. Only 1/5th of the non-farming workers are found in the organized section. The labour presence in India comprises of 487 million workers of which over 94 percent work in unorganized enterprises starting from pushcart vendors to home-based diamond and gem polishing operations. Estimates suggest that in the non-farming sectors, as we move upwards the income ladder, the part shared by the informal sector gradually decreases. But, as far as the agricultural sector is related, ignoring the state of economic class, the part of the unorganized workforce remains flat. More than 30% of National Income comes from the Unorganized Sector. The Indian Economy is characterized by the existence of a vast majority of informal or unorganized employment of labour. According to the Economic Survey of year 2007-08, 93% of India’s workforce include the self-employed and employed in sector of the unorganized. The Ministry of Labour, has divided the non-organized force of labour under four groups in terms of nature of employment, occupation, especially distressed categories and service categories.

Why is this problem arising
The unorganized labour is overwhelming in terms of its number range and therefore they are omnipresent throughout India. As the unorganized sector suffers from cycles of excessive employment nature, major part of the unorganized workers do not have stable avenues of employment. Those who appear to be employed visibly, are not gainfully employed, resulting in the existence of disguised unemployment. The workplace is scattered and fragmented. There is no formal employer – employee relationship. In rural areas, the unorganized labour force is highly stratified on caste and community considerable options. Such considerations are low in urban areas, it is not the case that it is altogether absent as the bulk of the unorganized workers in urban areas are basically migrant workers from rural areas. Workers in the unorganized sector are usually subject to indebtedness and bondage as their meagre income cannot meet with their livelihood needs. The unorganized workers are subject to exploitation significantly by the rest of the public. They are not offered good working conditions especially wages are much below compared to the formal sector, including closely comparable jobs, where the labour productivity is nothing different. Work status is of nothing but inferior quality of work and inferior terms of employment, both pay back and employment.


Best Solution to look forward
Among all categories of work, the most dominating category is agriculture sector. Among total labor force 60 percent belongs to agricultural activities and 40 percent belongs to nonagricultural functions. Among various nonagricultural activities, 19% are engaged in the household industry.  As per economic survey 2007-08 93% of India’s workforce include the self-employed and employed in unorganized sector and agricultural workers constitute the largest segment of workers in the unorganized sector (ie. 52% of the total workers). 100 days guaranteed employment to the unemployed families & Creation of assets. Taking a leap as we move ahead, these transformations are connected to the ongoing globalization process and the resultant efforts on the part of employers to minimize the cost of production to the minimal levels. It is also proved that many of these results are highly correlated and reinforcing mutually. A close analysis recommends that the growing in formalization of labour market has been central to most of these transformations, which highlights the usage of understanding the growth of unorganized sector in India and its implications. No doubt, it obviously indicates that these flexible workers in the new informal economy are highly vulnerable in terms of job security and protection from social elements, as they are not able to derive nothing of the social protection measures, stipulated in the existing labour legislations.